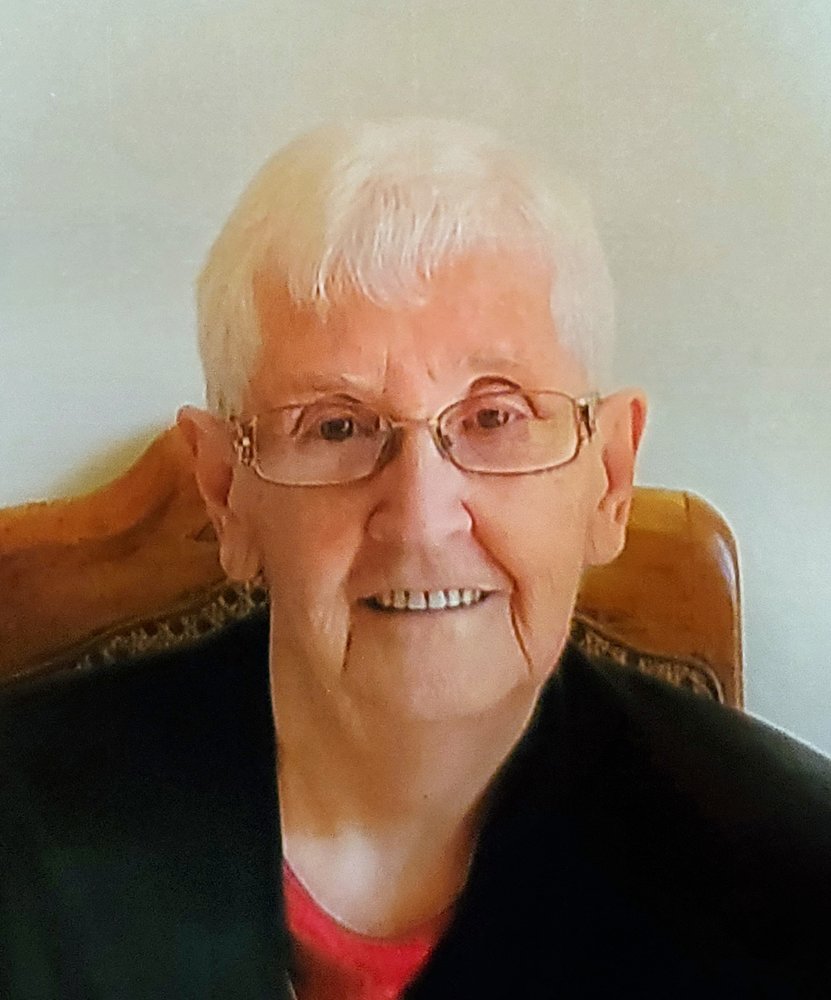 ANDERSEN:   The family of Roya Olive Andersen (née Campbell) is saddened to announce her passing at the age of 87 years on November 15, 2020 at Boundary Trails Health Centre. Roya was born on April 6, 1933 at Rapid City, Manitoba and was the youngest of four children.  Roya attended Little Saskatchewan School in Pettapiece for grade one. After that, all her schooling took place in Rapid City. Roya had no real memories of the family unit as it, unfortunately, split apart when she was quite young. Following this Roya and her Mom lived with some families in town and were very appreciative of this. Then the Kemp family invited them to stay at their house and they were so fortunate to have received this offer. The household consisted of Alice Kemp, her young son Gerry, her sisters Mae and Dot and her mother Mrs. Belcher.  Alice’s husband and brother were both serving overseas in the war at the time. It was here that Roya finally felt like she belonged to a family and she loved them all dearly. After the war Roya went and lived with her beloved Gran (Jean Muir). In her teens, Roya was surprised with the honour of being one of the nominees for Carnival Queen at the Rapid City Winter Carnival.  Also during her teen years Roya worked in town at the theatre, the café and at Samples General Store. It was while working at the store that a certain young man became a frequent visitor.  Andy and Roya were married on October 10, 1951 and from this day on they farmed together and raised a family. A son, Len, was born two years later and then four years later a daughter, Kathy, joined the family. Roya had a very busy life helping on the farm, raising children, making huge meals for the baling and harvesting crews, keeping a large garden and acres of grass to mow. She had never been happier as she now had a home and a family of her own. Family meant everything to Roya and she cherished it dearly.  She was also very happy that her brother Floyd and his family lived close by and that the two families farmed together.  This allowed for lots of good times and memories made between the two families. Andy and Roya had thirty years together on the farm but now looked forward to a new adventure. This led them to 8 Grant Boulevard in Brandon where they had many happy times and wonderful neighbours. One of Roya’s many talents was her knitting. Everyone in the family has afghans, slippers and sweaters made by her. A lucky few have the complete Nativity scene that she spent hours working on. The Salvation Army in Brandon was the recipient of many bags of toques and mitts she would drop off for them. Family dinners on special occasions would find anyone who was going to be alone seated at her dining table. Thanksgiving and Christmas would always find family and friends gathered there. The arrival of grandchildren brought about a new name for Roya. She was now Gran – a name that eventually everyone in the family called her.  In 1995, Roya and Andy moved to one of the four plexes on 26 Parkdale Drive. After Andy’s death in 2013 she continued to live there for a few more years.  During this time Roya still attended the daily coffee outing where she enjoyed the conversations with the many people she had come to know. A large part of her life was having her grandson, Andrew, and his family living so close to her. The visits with her two great grandchildren never failed to brighten her days. On March 2, 2019 Roya moved to Mandan Manor in Sanford to be closer to her daughter. This also allowed her the opportunity to be close to her granddaughter, Michelle, and her family. She always looked forward to the knocks on her back door by any of the four great grandchildren.  Roya moved in with her daughter and son-in-law on September 20, 2020 where she had her own bed/sitting room. She loved to tell everyone how spoiled she was. Sadly she was only able to enjoy this time for about a month as she suffered a stroke on October 22.  She was taken to Health Sciences Centre where she remained for a few days. On October 28th, she was transferred to Boundary Trails Health Centre where she was placed in palliative care. On November 15, she peacefully left us. We will miss our Gran. Lovingly remembered by surviving family - children: Len (Elanra) and Kathy (Dave); grandchildren: Michelle (Carl), Andrew (Pam) and Laura; great grandchildren, who were the light of her life and who she called her “Sensational Six”: Brandon, Samantha, Danika, Avery, Sydney and Emmitt. She will be missed by sister-in-law Elaine; as well as many nieces and nephews. Predeceased by husband Andy; parents Roy and Florrie; in-laws Andrew and Hansine; brothers Keith (Edna) and Floyd (Joyce); sister Doreen (Grant); sisters-in-law Joan (Lachie), Kathleen (Harold), Olga (George); brothers-in-law John (Mary), Hans (Martha), and Albert. A Celebration of Roya's Life will be held on Friday, August 20, 2021 from 1:00 p.m. - 4:00 p.m. at the White Tent at the Keystone Grounds, just South of the Dome Building. Open to all family and friends. Donations may be made to the Heart and Stroke Foundation, 1379 Kenaston Blvd., Winnipeg, MB, R3P 2T5.

To send flowers to the family or plant a tree in memory of Roya Andersen, please visit Tribute Store
Friday
20
August