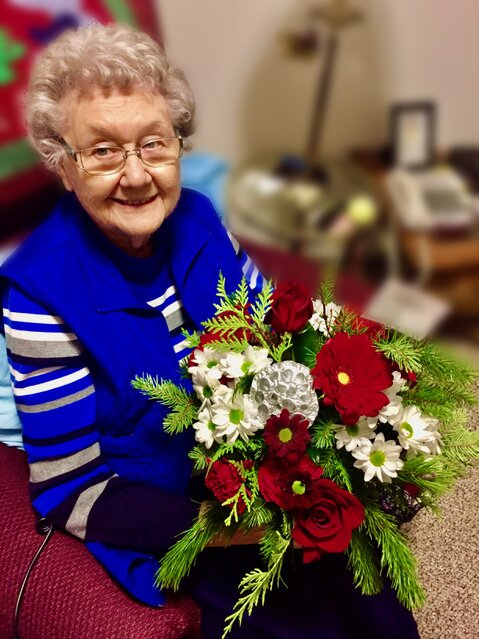 DELMAGE:  Doreen Katherine (née Petrick) Delmage passed away at the Brandon Regional Health Centre on Monday, August 16, 2021 at the age of 91 years. Born to Albert and Kathleen Petrick on December 8th, 1929 in Brandon, Manitoba, Doreen was raised on the family market garden on 1 St. North. After graduating from Brandon Collegiate Institute, Doreen moved to Minnedosa to work as an office assistant. While in Minnedosa, she met Albert (Bert) Delmage and the two were married on July 22, 1950. After the arrival of their first son, Mark, Doreen and Bert moved to Shilo for five years. Taking advantage of the Veterans Land Act, Doreen and Bert started work on building their home in Brandon. They were one of the original thirteen V.L.A. residences on Richmond Ave., west of 18th Street. Moving into their new home in 1957, they continued their family with the birth of their second son Mickey and daughter Heather. During their life in Brandon, Doreen and Bert made many good lifelong friends, not only on Richmond Ave., but also through Central United Church and their Couples Club events. Doreen and Bert enjoyed travelling and with their family and friends, visting most of Canada and many US states, including the southern United States to escape the Manitoba winters. Doreen was on the Ladies Auxiliary of The Commonwealth Air Training Plan Museum. Doreen was a very active bowler and later on in life took up golfing. She also enjoyed baseball and followed the Blue Jays either live, on TV or the radio. Her other interests included reading and movies. Since 2013, she had been living at the Victoria Landing Retirement Residence. Doreen is survived by her son Mickey, daughter Heather (Bela), granddaughter Olivia, sisters-in-laws, Marg Petrick and Gwen Delmage, along with many nieces and nephews. Doreen was predeceased by her parents Albert and Kathleen, husband Bert, son Mark, siblings Bob Petrick and Shirley Sigurdson and daughter-in-law Doris Delmage. As per Doreen's wishes, no formal service will be held. A private Family Interment to take place at the Brandon Cemetery on Tuesday, September 14, 2021.

To send flowers to the family or plant a tree in memory of Doreen Delmage, please visit Tribute Store

A Memorial Tree was planted for Doreen
We are deeply sorry for your loss ~ the staff at Brockie Donovan Funeral & Cremation Services
Join in honoring their life - plant a memorial tree
Services for Doreen Delmage
There are no events scheduled. You can still show your support by sending flowers directly to the family, or planting a memorial tree in memory of Doreen Delmage.
Visit the Tribute Store
Share A Memory
Send Flowers
Plant a Tree