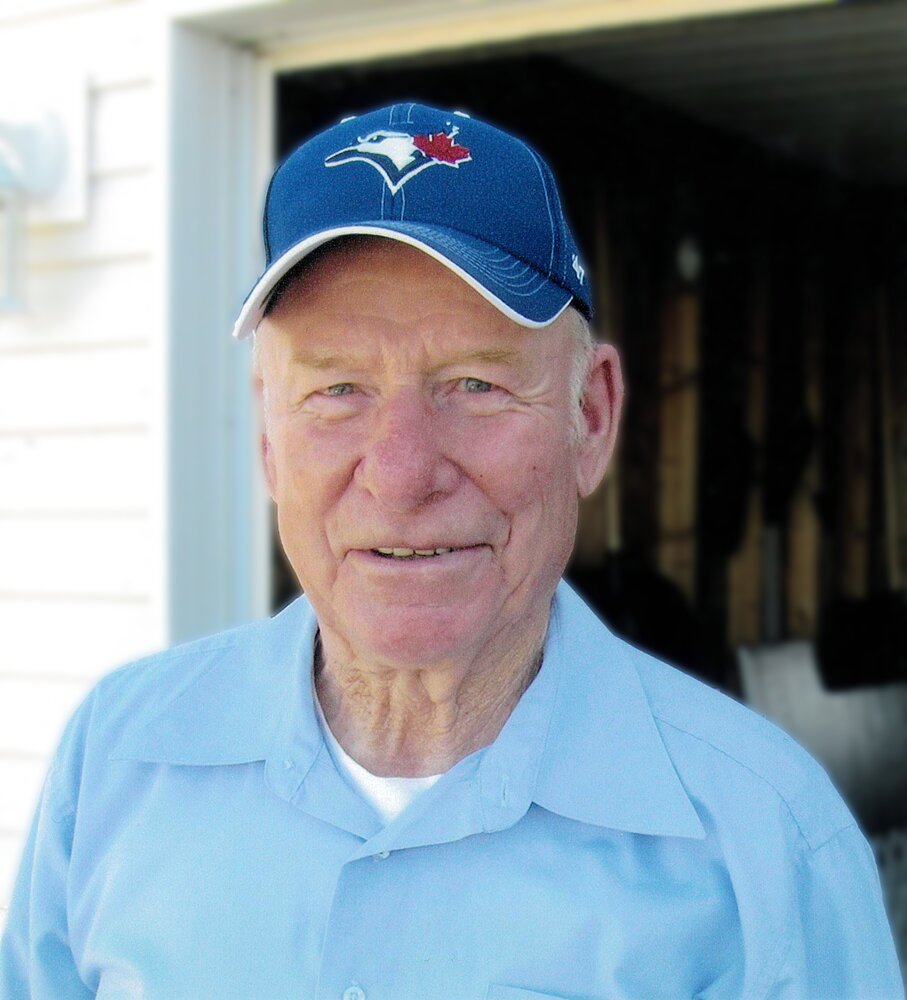 The family invites you watch the Celebration of Orley's Life. Please CLICK HERE

With family at his side, Orley McLauchlin passed away peacefully on October 5, 2021 at Hillcrest Place in Brandon where he had been residing since July.

Orley was born on June 10, 1934 at the family farm south of Harding.  He was predeceased by his parents Orley and Elsie McLauchlin, his older brother Ellwyn and his grandson Matthew Peters.

Orley met his wife, of 61 years, Adele at a dance in Lenore and they were married January 16, 1960.  Orley continued to work at Manitoba Highways for a few years when they first got married, a growing farm and four children being born in six years, he was needed full time on the farm.  They resided and farmed the McLauchlin family farm until 2001 when they moved to Brandon.

On the McLuachlin Century farm they raised chickens, pigs, cows and grain but cattle was his passion.  They bought their first purebred Maine Anjou heifer in the mid to later 70's and it did not take long for him to become recognized as one of the premier breeders of Maine-Anjou cattle not just in Manitoba but in Canada.  They travelled to shows across western Canada as well as the Toronto Royal.  In 1985, they won the prestigious “Grand Showman Award” for Canada.  In 1992, they decided to disperse their purebred cattle but remained in the commercial cattle business for a few more years.

He was not one for hobbies but loved sports, especially curling and baseball.  He loved the game of curling and participated in a number of leagues and bonspiels in Manitoba and any province that the Canadian Cattleman’s Bonspiel was being hosted.  Toronto Blue Jays was his favorite sports team.  Orley and Adele travelled to Toronto for a stretch of home games every year from 2004 to 2017.

A Celebration of Orley’s Life was held on October 13, 2021 at the Brockie Donovan Chapel. Donations in memory of Orley may be made to a charity of your choice.

The family would like to extend a special thank you to Dad's dear friends who kept him socializing on coffee row and taking him out to the farm prior to his year in care. The Hillcrest Place and Brockie Donovan staff for their caring assistance.  We would also like to thank all the family and friends that have sent food, flowers and wishes.

Rest in peace, we will miss you!

To send flowers to the family or plant a tree in memory of Orley McLauchlin, please visit Tribute Store

A Memorial Tree was planted for Orley
We are deeply sorry for your loss ~ the staff at Brockie Donovan Funeral & Cremation Services
Join in honoring their life - plant a memorial tree
Services for Orley McLauchlin
There are no events scheduled. You can still show your support by sending flowers directly to the family, or planting a memorial tree in memory of Orley McLauchlin.
Visit the Tribute Store

Share Your Memory of
Orley
Upload Your Memory View All Memories
Be the first to upload a memory!
Share A Memory
Send Flowers
Plant a Tree