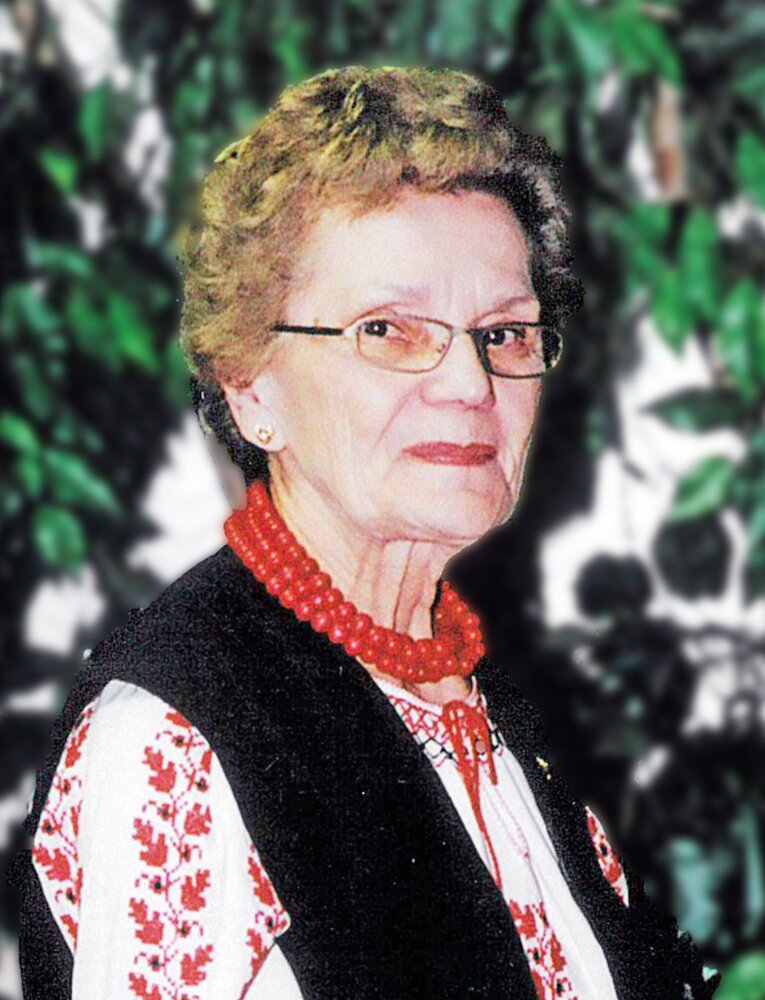 Please share a memory of Irene to include in a keepsake book for family and friends.
View Tribute Book

KOZACK: Irene (nee Obedniak) peacefully, with her loving son Terry at her bedside, entered into eternal rest at Hillcrest Personal Care Home, on Monday, April 11, 2022. Irene was born January 24, 1929 in the Rossburn area. She grew up on a farm with her parents, Andrew and Anastasia (Kostiuk); brothers, Nicholas and Thomas and sisters, Annie, Mary, Pauline and Evelyn. She married Adam Kozack on October 10, 1948. The young couple lived on their farm for ten years and were blessed with three children, Patricia, Dennis and Terry. Life on the farm was difficult. In 1958, they decided to sell their farm and moved to Brandon. They built a house in the east end and it became their forever home. Irene worked nights at MTS (Manitoba Telephone System) and worked some days housecleaning and developed lifelong friendships with her clients. Adam and Irene worked together raising their family. Irene loved to cook Ukrainian dishes such as perogies, cabbage rolls, borscht and provide care packages for her children. She loved to work in her vegetable and flower gardens. In the fall, with her sister Evelyn, they would make various pickles, canning borscht and freezing vegetables. Adam and Irene enjoyed travelling, Adam would do the driving and Irene was the navigator. Their daughter Patricia usually accompanied them on their road trips. They travelled to North and South Dakota to such places as Mount Rushmore; to eastern Canada to Thunder Bay, to visit their son Terry, and to western Canada to Kamloops, to visit their son Dennis and their granddaughter Shannon. Irene was an active member of Saint Mary's Ukrainian Catholic Church. She sang in the choir for many years. She was a member of (UCWLC) Ukrainian Catholic Women's League of Canada for over 50 years and eventually she became a Life Member. Adam and Irene were very compatible and had a wonderful marriage. They were blessed to have celebrated their 61st wedding anniversary together. Irene will be lovingly remembered and sadly missed by her son, Terry Kozack (Shirley) from Melita; granddaughter, Shannon and Al Hay; great- grandchildren, Skylar and Dayton from Kamloops, BC; her sister, Evelyn Kozun; sister in law, Sylvia Obedniak; nieces, Malveen Austin and her family, Connie and Ted Speirs and Darlene and Bob Tanasychuk from Prince George, BC. Irene was predeceased by her husband, Adam Kozack 2010; daughter, Patricia 2015; son Dennis 2018; brother in law, Eugene Kozun 2016; brother, Thomas Obedniak 2012; niece, Evelyn (Evie) Obedniak-Mauro 2013 and nephew, Bruce Austin 2004.

Divine Liturgy will be held at St. Mary’s Ukrainian Catholic Church, 927 Assiniboine Ave, Brandon, MB, on Friday, April 22, 2022 at 10:00 a.m. with Father Yaroslav Strukhlyak as celebrant. Active pallbearers are: Kirk Austin, Jillian Austin, Erik Harpe, Andrew Seitz, Connie Obedniak-Speirs and Ted Speirs. Crossbearer will be Jennifer Seitz. All in attendance were considered honorary pallbearers. Interment will be held at the Brandon Cemetery. If friends so desire donations in Irene's memory may be made to the Alzheimer Society 48-457 9th Street, Brandon, MB, R7A 1K7 or to Hillcrest Activity Department, 930 26th Street, Brandon, MB, R7B 2B8.

Rest in peace dear Irene, you are free of pain and in the arms of your soul mate, your loving husband, Adam. We love you, you will remain forever in our hearts.

To send flowers to the family or plant a tree in memory of Irene Kozack, please visit Tribute Store
Friday
22
April

Share Your Memory of
Irene
Upload Your Memory View All Memories
Be the first to upload a memory!
Share A Memory
Send Flowers
Plant a Tree