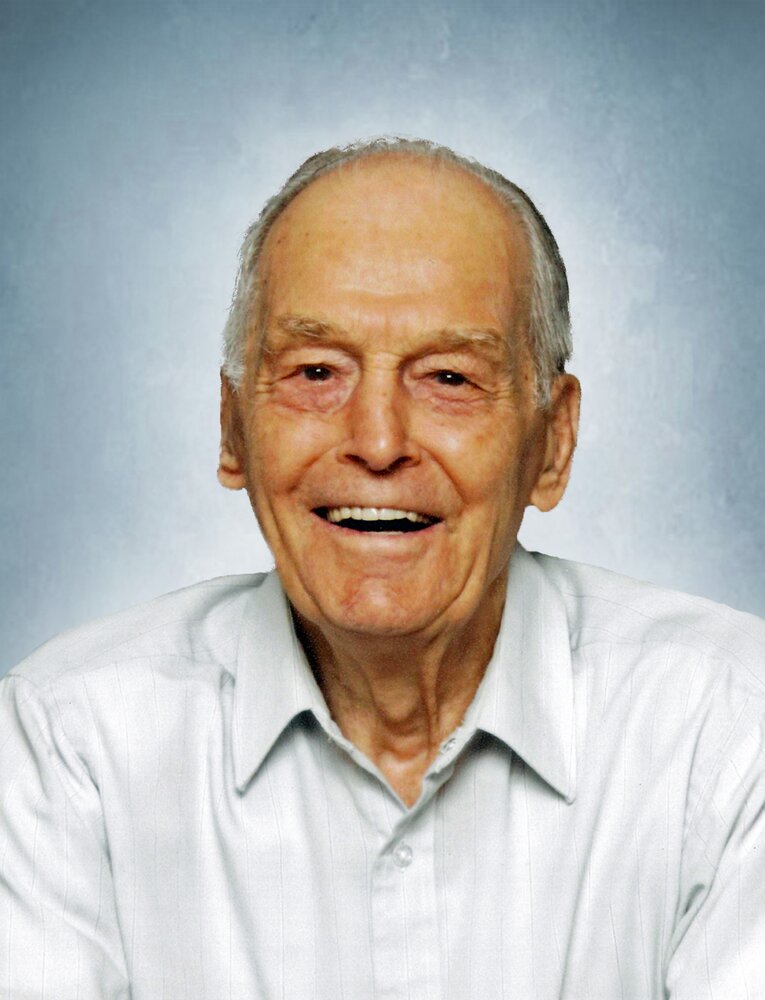 The family invites you to watch the livestream of the Mass of Christian Burial for Lionel Fillion. Please CLICK HERE

A loving husband, father, grandfather and friend to many passed away May 18, 2022 at the age of 94.  Lionel is lovingly remembered by his children Norbert (Verna), Catherine (Norbert) Vuignier, Marie, Marianne (Garﬁeld) Lee, grandchildren Jordan, Landon (Stephanie), Jenna, Brigitte (Brenden), Pierre, Cameron (Morgan), Duncan (Laura), Jamie (Sadie) and nine great-grandchildren. He is also survived by his sister Helen Montsion and brother Robert Fillion (Darlene), in-laws Jeanne Fillion and, Margaret Barre and numerous nieces and nephews. Also left to mourn his passing is special friend and companion Shirley Kernahan.  Lionel was predeceased by his parents Hector and Aldea, loving wife of 60 years Lois, son Anthony, brothers and sisters Come, Aime, Hortense Fouillard, and Stella Giroux. Lionel was born at St. Jean Baptiste, August 15, 1927, the third child of Hector & Aldea (nee Bissonnette) and lived on the farm there until spring of 1940 at which time the family moved to Rutledge - Oak Lake area. There he completed grade 12, graduating in 1945. In 1954, Lionel married Lois Barre and together they raised ﬁve children Norbert, Catherine, Marie, Marianne and Anthony.  They farmed 5 miles southeast of Virden in the Rural Municipality of Wallace. Over the years the farm got larger and expanding into other municipalities. The ﬁrst years started with a cow/ calf operation, but later switched to feeder calf operation. He farmed the land for grain and hay feed. After 30 plus years of feeding and raising cattle he sold all the cattle and strictly produced, sold and trucked hay bales. Lionel had a strong work ethic and a great passion for farming. Many Sunday family outings would be checking the crops. Lois would say, “You can take the man oﬀ the farm but you can’t take the farm out of the man.” That was so true because later on he bought his brothers farm at Stead, Manitoba not farming it himself but renting it out. During their early years of marriage Lionel and Lois became very interested in a healthy lifestyle. They would read, listen to and watch everything they could about health. We remember many supplements on the shelves. We think this has served dads 94 years well. Lionel’s faith was very important to him and he and Lois raised their children in the catholic faith. Lionel was an active member of the Sacred Heart Catholic Parish in Virden, where he served on the parish council doing more than one term. He was also an active participating member of the Knights of Columbus. Lionel did not like the Manitoba cold winters and after the children were gone from home, he and Lois would spend winter months in Mesa Arizona. There they made many new friends and were very busy with diﬀerent social activities such as dancing, golﬁng, playing pool and potluck parties. In 2003, Lionel and Lois bought a house and moved to the seniors community of Monterey Estates in Brandon. Monterey Estates is a vibrant active community where they made many new friends. A few years after Lois passed away, Lionel moved to the assisted living community of Riverheights Terrace in Brandon. Lionel had a passion for life which served as an inspiration for all who knew him. Lionel loved dancing and socializing with people and spent many hours talking to anyone and everyone. Lionel was always welcoming to visitors especially the French speaking relatives because he got to practice French language vocabulary. After Lois passed away Lionel had a special friendship and companionship with Shirley Kernahan. They would go dancing and he would tag along with her on her musical outings to the nursing homes in Virden. Lionel will be missed and loving remembered by family and friends. The family would like to thank the staﬀ at Riverheights Terrace for their kindness and assistance of Lionel during the last few years. Mass of Christian Burial will be held at St. Augustine’s Roman Catholic Church, 327 4th Street, Brandon, MB on Thursday, May 26, 2022 at 11:00 with Fr. John Okosun as Celebrant. Interment will follow Rosewood Memorial Gardens.

To send flowers to the family or plant a tree in memory of Lionel Fillion, please visit Tribute Store
Thursday
26
May

Share Your Memory of
Lionel
Upload Your Memory View All Memories
Be the first to upload a memory!
Share A Memory
Send Flowers
Plant a Tree