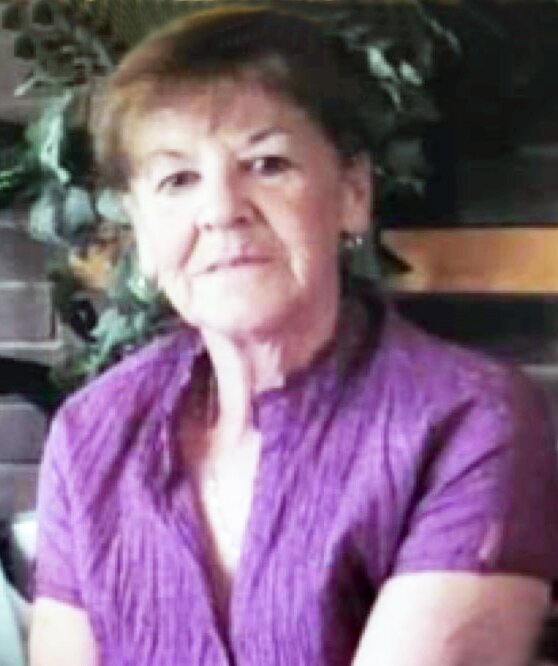 The family invites you to watch the Celebration of Anna's Life. Please CLICK HERE

MORTIMER: Anna Mortimer was born in 1944, second or third child of James and Olive Mortimer, depending on whether she beat her twin sister into the world or if Ann was the first one to be born.

The Mortimer children grew up in Melita, Manitoba and many stories from this time revolved around the mink farm that the family lived on and looked after. I say grew up but anyone who knew Anna would know that this is a relative term as Anna was always a happy go lucky individual and took things with a little less serious frame of mind. This was passed along to her children and grandchildren who all enjoy life and look at things through rose coloured glasses.

In 1960 Anna gave birth to baby girl (Darcie Nadine) and she was put up for adoption. In 1961 Anna married John Schoonbaert and together they had three children: Micheal, Melissa and Martin

Most of her children remained close to home except for the oldest son who took to the road and joined the military. The family moved around a lot (or so it seemed to the children) from Melita to Brandon, to Hartney and back to a farm north of Melita. They stayed there for around eight years and the family raised dairy and beef cattle as well as planting and harvesting a large garden plot that the family, including John and Anna’s parents, used to supplement their food supplies including large amounts of potatoes.

Anna has always been a crafty person. Back in the seventies she got deeply into string art and many works of art ended up on the walls of the family house. She was also involved with sewing and helped local crafters by showing them how to make stuffed animals. Many stuffed frogs and turtles were seen laying around the house as well as bags of poly-fil stuffing for making the animals soft, cuddly and huggable for children and adults alike.

When her youngest son was old enough to go to school, Anna decided to rejoin the workforce and went to work at the Victoria Inn just down the street. After that, she tried her hand at real estate then became a caretaker at one of the local schools, even earning her boiler operator's license which meant that she could look after an entire school, including the boiler which provided heat to the school.

After caretaking for a while, she moved to the paint crew which was responsible for painting all of the schools in the Brandon School Division. During this time she and John decided to part ways. She again found love in a partner Del; he and she travelled and gardened and shared their love of animals.

Until his untimely death she continued to work until her retirement; all the while never forgetting about her first born.  In the early 1990’s she was reunited with her first born and Darcie was added back into the family, filling a void Anna had felt for many years. The reconnection brought her peace and sealed the crack she had in her heart.

She retired from the school division and enjoyed a few years of very active retirement until the last several years when Anna had a few health complications which compromised her ability to enjoy her life the way she deserved.

Over the last few weeks of her life, she was learning to enjoy her life again despite her health issues. Her final days were spent with family close by her side laughing, joking and enjoying her limited time. She passed away peacefully with family by her side.

A Memorial Service was held at Brockie Donovan Chapel, 332 8th Street, Brandon, MB on Wednesday, July 6, 2022 at 1:00 p.m. with Kim Lewarne as celebrant. Interment followed at Rosewood Memorial Gardens. Donations in memory of Anna may be made to a charity of choice.

To send flowers to the family or plant a tree in memory of Anna Mortimer, please visit Tribute Store
Wednesday
6
July

Share Your Memory of
Anna
Upload Your Memory View All Memories
Be the first to upload a memory!
Share A Memory
Send Flowers
Plant a Tree