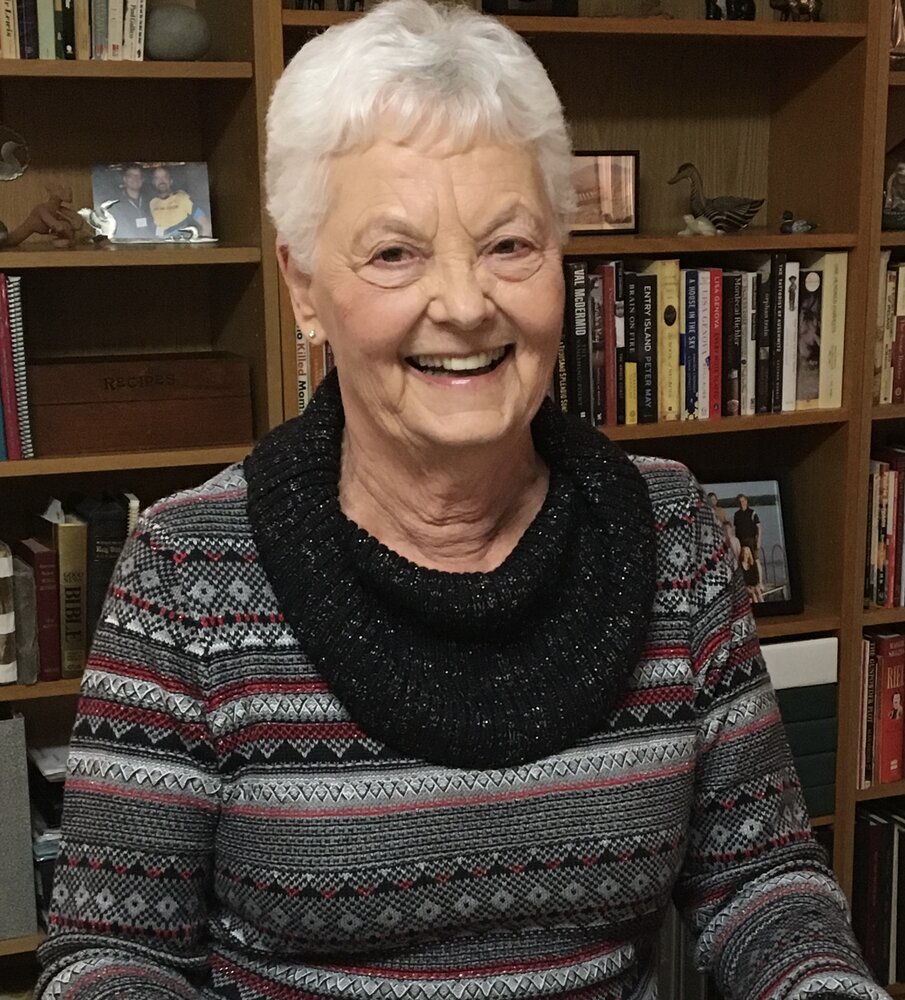 The family invites you to watch the Celebration of Isobel's Life. Please CLICK HERE

Isobel was a vibrant, active woman who deeply loved her family, treasured her friends, was uplifted through music, and had a passion for curling.

The middle of 5 children, Isobel grew up in Roland, Manitoba, a town named after her great-uncle.  She loved figure skating and piano, and got her start in curling, which has been a lifelong source of friendships and fun. Together with Uncle John McDonald’s family, they spent summers at the cottage at Falcon Lake, a place where subsequent generations have continued to gather.

Isobel met her future husband Alden when they were students at the University of Manitoba. Always interested in new experiences, she joined the fencing team. She graduated in 1958 with a BSc in Home Economics. She completed clinical training in dietetics at University Hospital in Saskatoon, returning to Manitoba in 1959 to work as a dietitian at Winnipeg General Hospital (now HSC). Al and Isobel were married in Roland in 1960.  They moved to New Zealand in 1961 for Al to complete his PhD in agriculture, and they started their family there, with the birth of their first son and daughter.

In 1965, Melfort, Saskatchewan became home base to raise the family.  Al began his career as an animal scientist with Agriculture Canada, their younger son was born, and they established close friendships that have continued to the present. Isobel was first and foremost an awesome mom to David, Lesley, and Trevor, cheering them on at countless band, choir, theatre, and sports events, sewing Halloween costumes, supporting the Scouts and Guides activities, and chaperoning at tournaments and music festivals. She was a doer and was highly involved in the community - a member of the Kinettes service organization, active in the church, and a regular at the curling club.  She enjoyed cross-country skiing, and was often out in the fields behind the house.

Isobel and Al relocated to Kamloops, BC in 1985, and then to Brandon in 1991.  In both communities, they quickly connected through the church, choir, curling, and bridge; in BC they added downhill skiing and salmon fishing to their favourite activities, and in Brandon, Isobel joined the ladies golf league. She appreciated the strategy in curling, and played at the Brandon Curling Club into her early 80s. Her love of music was expressed through choir and piano, and inspired musical interests in her children and grandchildren.

Isobel was an enthusiastic sports fan – whether she was in the stands for her grandchildren, the Saskatchewan Roughriders, the Blue Jays or all levels of curling – she had an appreciation for a wide range of sports, and her analysis of the game was as astute as the professional sportscasters.

Family was always central for Isobel. She was keenly interested in and a huge support for her children and beloved grandchildren, with local travel revolving around visits with their families, and holidays often coordinated to connect with her siblings.

Making memories through road trips with a young family became world travel after retirement. Isobel and Al visited countries spanning 4 continents, from Costa Rica to Australia, and from Scotland to Thailand.  They enjoyed going a little off the beaten path, and found travel was often as much about the people they met as the places they went.

Isobel was deeply loved and will be dearly missed.

Share Your Memory of
Isobel
Upload Your Memory View All Memories
Be the first to upload a memory!
Share A Memory
Plant a Tree