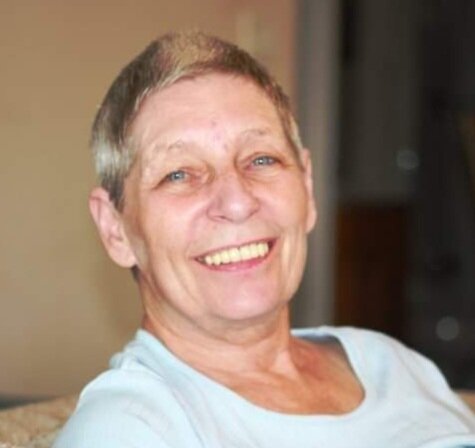 JORDENS: Patti Lynne Jordens (nee Old) passed away peacefully on October 27, 2022 at Middlechurch Home, at the age of 75 years.

She was predeceased by her parents Arnold (Hon) Old and Frances (Fran) Old nee Watkins and loving husband Joseph Jordens on November 27, 2020.

Patti was born on December 29, 1946, raised in Brandon, Manitoba and spent summers at the family cottage in Wasagaming.  She attended Earl Haig School and Brandon Collegiate Institute in Brandon. She enjoyed roller skating and instructed and performed in Brandon and Wasagaming in the early 1960’s. She also coordinated and performed as a cheerleader for The Brandon Krugers Football team and “Krugers Players Association 1962”.

Patti married Joe in 1978 and lived in Winnipeg while working at Smart Paint as Office Manager until they retired and moved back to Brandon to take care of her father at home after the sudden passing of her mother.

She was a welcoming host, anything was a reason to celebrate with a BBQ or a special night out. Patti had many favourite dishes in her recipe book and made the best ever BBQ sauce and apple crumble.

She had a special fondness for the grandchildren and would never forget a birthday. Christmas shopping for presents to send was a well thought out procedure duly executed so presents were under their respective trees on time for the big day!

Patti kept busy knitting blankets and pillow covers, and was an avid sports fan. She was always up for watching a game, whether it was curling, baseball, rugby, hockey or football. Patti and Joe were dedicated Brandon Wheat Kings season ticket holders and never missed a game if they could avoid it. Patti and Joe had regular nights out with their 10 pin bowling teams in Winnipeg and lastly with the Polar Rollers in Brandon.  They would also support every sporting event that came to Brandon including the Scott Tournament of Hearts and Canada Summer Games and collected every pin she could get her hands on!  She also enjoyed the Royal Winnipeg Ballet and high school productions and concerts involving friends or family.

She loved travelling across Canada to visit family and has been to both east and west coasts as well as Hawaii and Mexico, a trip they won in a radio contest.  3 week trips to Vegas became an annual winter get-away.

She was more organized than most and took on the somewhat daunting task of tracing the family genealogy and would send yearly updates with births and deaths to family to add to our binders until her diagnosis of Lewy Body Dementia in her mid 60’s.

She will be lovingly remembered by friends and family.

The family especially thanks the following : the staff at Hillcrest, Fairview and Middlechurch Personal Care Homes for their dedication to Patti’s care throughout this journey.

A double Celebration of Life Service for Patti and Joe is pending.

To plant a beautiful memorial tree in memory of Patti Jordens, please visit our Tree Store

A Memorial Tree was planted for Patti
We are deeply sorry for your loss ~ the staff at Brockie Donovan Funeral & Cremation Services
Join in honoring their life - plant a memorial tree
Services for Patti Jordens
There are no events scheduled. You can still show your support by planting a tree in memory of Patti Jordens.
Plant a tree in memory of Patti

Share Your Memory of
Patti
Upload Your Memory View All Memories
Be the first to upload a memory!
Share A Memory
Plant a Tree