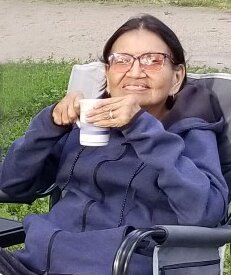 Diane was born in Portage April 26, 1960 to Norman and Elsie Bell she passed away peacefully with family by her side on January 6th, 2023.  She was gifted the Dakota name “TOKiya mani” (One who Walks First).   In the very young years of her life she developed tuberculosis and was treated at the Ninette Sanitarium for two years.  After her treatment she was taken away to an Indian Residential School in Brandon, where she was mistreated and abused for almost two years.  This stained her life but she did everything she could to move past this experience.  She was freed from this horror by close family that took her in and raised her as their own.  In her teen years she moved to Winnipeg to stay with her Auntie Ella and cousins.  She attended St. James Collegiate where she met friends and enjoyed going to community club dances.  She loved playing volleyball in school and she loved music; easy listening and country…but most of all Elvis Presley.

August 17, 1977, the day after Elvis died she met the love of her life.  Diane and her love Les, set off on adventures of a lifetime, who many can only dream of.   A move to Poplar Point in September of 1977 followed, to live on the farm; returning to Portage the following December.  Their first child arrived on September 30, 1978, a son; Christopher.  A move to Austin was next where Les found work on a farm for the winter.  The Spring of 1979 took them back to Portage where Diane worked at the very first Robins Donuts.  Diane and Les continued to work at various jobs to meet rent payments and raise their son.

A second child, Curtis was born on March 12, 1983.  Diane eventually started work as a Psychiatric Nurses’ Aide at the Portage Mental Hospital where she worked until 1988 when their daughter Courtney was born.

In 1987 they moved to Dakota Plains and Diane attended Yellow Quill College in Portage to complete her Grade 12, graduating in September that year.  They moved to Brandon in 1990 where Diane attended Brandon University to further her education focusing on Native Studies.  In 1994 they moved to Rivers and Diane eventually received work at the new Maple Leaf Plant.  They remained in Rivers to work and raise their family.

Diane loved to travel, she enjoyed camping, fishing, reading, listening to music, dancing and watching crime dramas.  She loved caring for her children and grandchildren and loved her husband deeply.  A bond that could never be broken; their adventure lasting 45 years 5 months 1800 hours and 3 minutes.  Tragedy struck in 2006 with the loss of their son Curtis, devastating Diane.  Her health deteriorated and she struggled with health issues until the end; always facing these challenges with optimism.

The Lord is my shepherd;

I shall not want.

He makes me lie down in green pastures;

He leads me beside still waters.

He restores my soul;

He leads me in paths of righteousness

for His name’s sake.

Even though I walk through the valley of

the shadow of death I will fear no evil;

For Thou art with me; Thy rod and Thy staff they comfort me.

Thou preparest a table before me in the

presence of mine enemies;

head with oil; my cup overflows.

Surely goodness and mercy shall follow me all the days of my life;

and I shall dwell in

the house of the Lord forever

To send flowers to the family or plant a tree in memory of Diane Windsor, please visit Tribute Store
Print
Friday
13
January