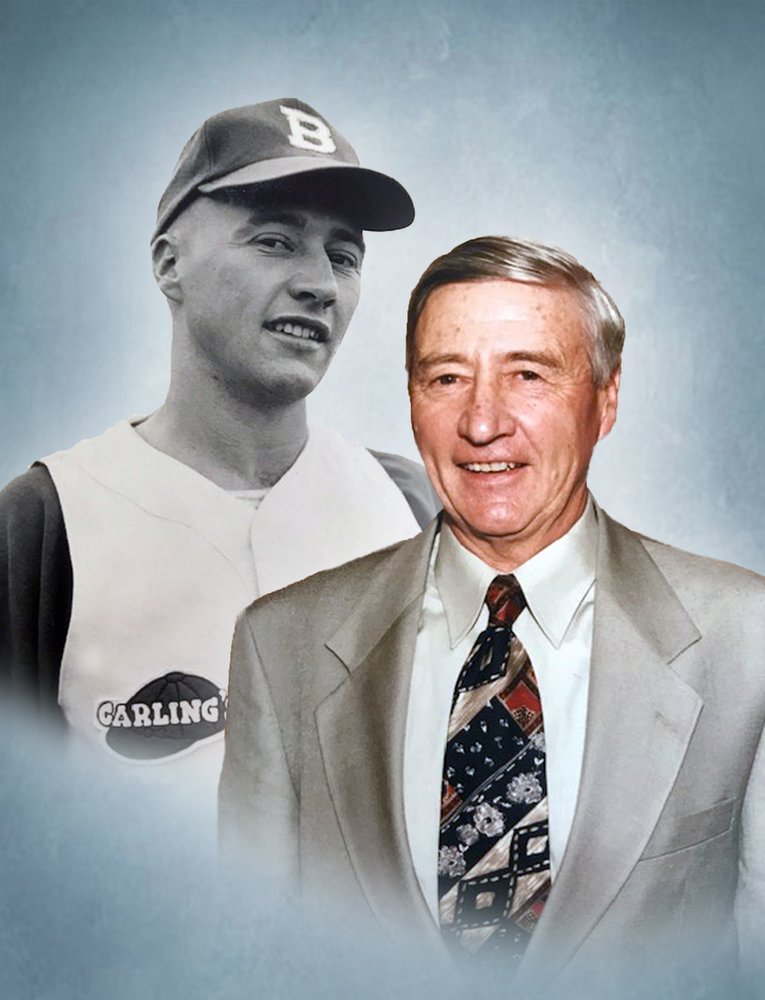 The family invites you to watch the Memorial Service for Irvin Powers. Please CLICK HERE

Irv was born in Nesbitt, Manitoba on January 10, 1934 the eldest child of Cam and Marion “Bud” Powers.  His early years were spent working on the family farm and going to school in Nesbitt and later, Souris.  Once he was older, his summer holidays were spent working on a local field crew with the Manitoba Power Commission, now known as Manitoba Hydro. This led to a series of jobs with Hydro in Brandon where he eventually became a draftsman and enjoyed a 35 year career.

Sports was a large part Irv’s life. A fierce competitor, he was the player you wanted on your team and not the one playing against you. He excelled on the ice, playing intermediate hockey with Souris, Erickson, Rivers and Brandon. He was a strong skater who was equally effective as a playmaker and goal scorer.  He continued to stay involved in hockey, taking on management duties with the Brandon Olympics and Molson Pioneers Oldtimer hockey teams; and organizing game day chaperones with the Brandon Wheat Kings. He formed strong bonds with his teammates and counted many of them as his closest friends, enjoying the time spent together on and off the ice and diamond.

Dad’s true love was baseball.  He played baseball and fastball in the golden era in the fifties where almost every rural town had a ball team and the talent pool was deep. A speedy outfielder, he played minor ball in Nesbitt, Junior in Souris and Senior with the Brandon Cloverleafs. A serious work accident in 1957 ended his playing career. Determined to not let the accident keep him from the sport he loved and with the support of family and friends, he returned to the diamond as a manager.  He went on to coach the Cloverleafs for 23 years, winning several league and provincial championships.  He coached in 5 national championships winning a gold in 1971 and a silver in 1973. Irv was honoured for his baseball achievements in 1997, as one of the first members of the Manitoba Baseball Hall of Fame.

Irv met the love of his life Audrey Hamilton at Clear Lake in 1959. They were married in 1962 and they soon settled into their home on Queens Crescent in Brandon. They raised their two sons, Jarrett and Jason and daughter, Sherrill-Lee. Dad was devoted to his family, spending many hours by their side supporting them in their activities. He took an active role in coaching and had a positive impact on minor sports in the community.

In 1975, Irv and Audrey purchased a cabin at Sandy Lake where they spent summers with family and their many friends.  They took great pride in their property, building a place for family to gather and enjoy.  Dad spent countless hours in the yard tending to the smallest of detail. There was not a weed or branch left untrimmed under his watch.

Following his retirement in 1990, Irv and Audrey were able to spend most of their summers at their cabin while enjoying trips to Texas, Hawaii, Florida and California in the winter.  As his children grew older, he gained 3 new additions and approved proudly of his own children’s life partners.  Bob, Sandy and Melanie shared a special place in his heart.  The family expanded further and they became grandparents.  Irv was especially proud of his grandchildren and enjoyed telling others about Carter and Justin’s latest games on the ice, Arlynne’s accomplishments on the court and Ryan’s success on the diamonds.  His room in Fairview was covered with pictures of his grandkids and newspaper clippings of their achievements.Our family is deeply appreciative to the wonderful staff at Fairview Personal Care Home for the care Irv received during his brief illness.  We also acknowledge the many family and friends who have reached out during this time with condolences and words of comfort.   Donations in memory of Irv may be made to the  Irv Powers Memorial Baseball Scholarship Fund or to a charity of choice.  For more information about this scholarship, please contact the Brandon Area Community Foundation, 2830A Victoria Ave., Brandon, MB, R7B 3X1, Tel: at (204) 571-0529.

Share Your Memory of
Irvin
Upload Your Memory View All Memories
Be the first to upload a memory!
Share A Memory
Send Flowers