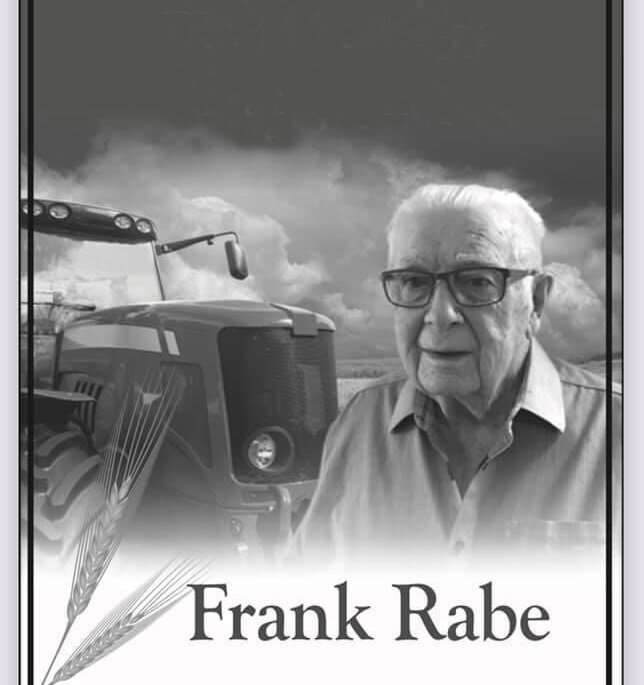 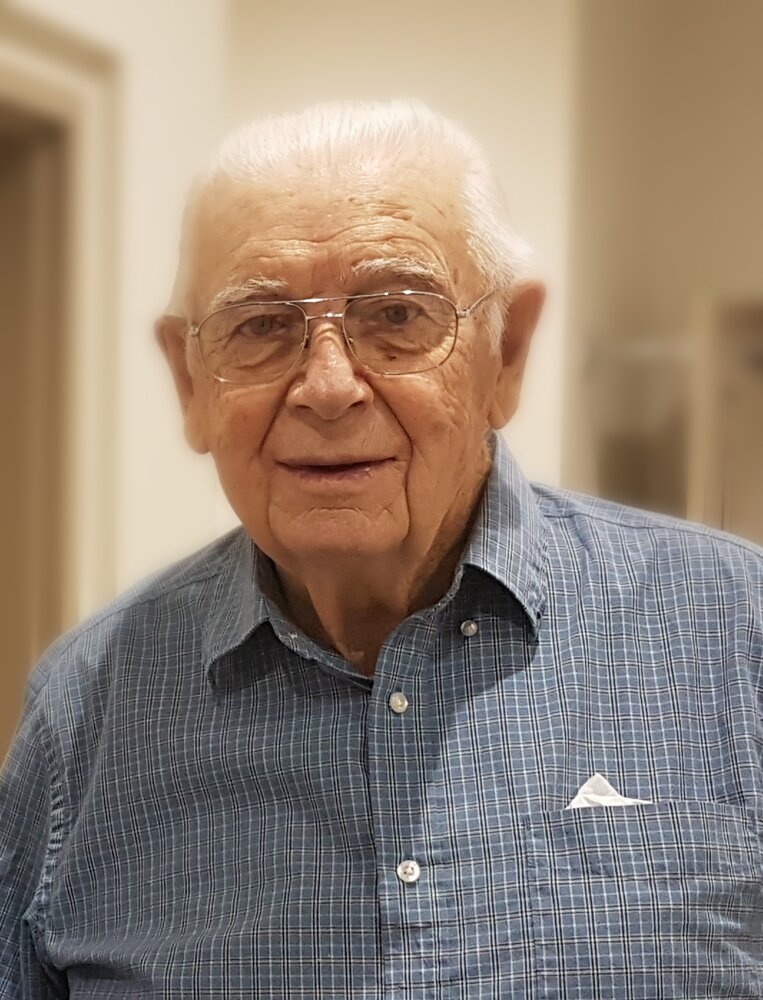 The family invites you to watch the Graveside Service for Frank Rabe. CLICK HERE

RABE:  Surrounded by his family, Frank Alexander Rabe passed away on Wednesday, October 6, 2021 at the Assiniboine Centre, Brandon Regional Health Centre at the age of 90 years.  For the past five years, Frank has resided at Rotary Villas in Brandon. Prior to that, Frank resided on Hummingbird Lane for 3 years after moving to Brandon from the farm.  Frank was raised, then married, and then raised his own family on the Rabe farm – the original homestead pioneered in 1881 in Alexander. As a young boy he attended Dalton School, and then went on to Alexander High School.  Frank furthered his schooling by attending the University of Manitoba Agriculture Program. It was while attending High School that Frank met the girl he knew he would marry. On November 22, 1952 Frank and Betty were married and began their life together. During their first few years of marriage, they built their own home on the Rabe family farm. Together, Frank and Betty raised three children: Greg, Barry and Lori. Farming, family, friends and community were the most important things to Frank.  Hard work, strong work ethic, and a willingness to lend a helping hand to others were values that Frank lived by and passed on to his children. During the 80+ years living in the Alexander community he volunteered and filled many roles within various organizations. Frank was a trustee representing Alexander on the Brandon School Division Board for more than 25 years.  He was a lifetime member of the Masonic Lodge and Alexander United Church, and was also a member of the Order of the Eastern Star. Countless precious memories were made through family activities.  In the early years were many camping trips, ski-doo rides, picnics, and Sunday drives.  Camping trips progressed into a cottage at Oak Lake, which then moved to Clear Lake.  Family and friends enjoyed many celebrations and get-togethers at Frank and Betty’s.  Their “gang” played cards, attended weekend dances, picnics, fall suppers (anywhere one could be found), and always brought in the New Year together.  Frank was a supportive father to his children’s interests, activities, failures, and successes.  He was a role model each of them strived to follow. Frank was happy to see his family grow as each of his children grew up and got married.  Then came his greatest gift of all; six grandchildren and seven great-grandchildren.  Frank was so proud of his family and was deeply interested in their lives.  He and Betty were on-the-go keeping up with the grandchildren’s activities. Grandma and Grandpa created many traditions with the grandkids, and nothing would make them happier than having the grandkids to the farm or cottage for a sleepover. Grandpa’s supply of toothpicks and peppermints, reading books before bed and playing Eye Spy in the morning, the circus, golf, are memories that bring the grandchildren great joy as well. After Betty passed, Frank missed her dearly and did well to look after himself the last two and a half years. He always tried to keep up with technology to stay better connected to his family, which often resulted in “tech-support” calls to his kids or grandkids. Not a visit, phone call, or FaceTime chat went by before Frank requested to know what the grandkids or great grandkids were up to, and he always ended the call with “We will see what tomorrow brings.” Frank was straight to the point, a black-or-white guy, and often said what was on his mind, but he was also very kind-hearted. The pride and love he had for his family was evident in the way he would tear up when talking about the life he built with Betty, and the family they raised together. Frank will be lovingly remembered by his son Greg (Wanda), son Barry (Trinda), daughter Lori (Terry) Senkbeil; cherished grandchildren Melissa (Ben), Cody (Amy), Justin (Karla), Krysten (Dave), Cory, Kinsley; precious great- grandchildren Max, Frankie, Beau, Myla, Cooper, Rory, Brooks; sister Alvina (Tim) Timmins, sister-in-law Pat McManes as well as numerous special cousins and nieces and nephews.  Frank was predeceased by his wife Betty, parents Alexander and Margaret Rabe, brother Austin (Marian), sister Vi (Rex), brothers-in-law Jack Thompson, Gordon (Donna) Thompson, Hugh McManes, and niece Dianna McManes. The graveside service to honour Frank’s life took place on Tuesday, October 12, 2021 at the Alexander Cemetery, officiated by Rev. Doug Neufeld.  Following the service, the family gathered at the farm to have supper in the field and to spread Frank and Betty’s ashes, where they built their life together. His loved ones are comforted in knowing that they are together again. Donations in memory of Frank may be made to the Brandon Regional Health Centre “A3-Palliative Care”, 150 McTavish Avenue East, Brandon, MB, R7A 2B3, or to the Whitehead Fire Department, Box 107, Alexander, MB., R0K 0A0.  The family would like to acknowledge the friendship and care given to Frank by Cynthia Sisson, fellow residents and staff at Rotary Villas and Dr.P.VanRensburg over the years.

It isn’t the farm that makes a farmer…it is the love, hard work and character.

To send flowers to the family or plant a tree in memory of Frank Rabe, please visit Tribute Store

A Memorial Tree was planted for Frank
We are deeply sorry for your loss ~ the staff at Brockie Donovan Funeral & Cremation Services
Join in honoring their life - plant a memorial tree
Services for Frank Rabe
There are no events scheduled. You can still show your support by sending flowers directly to the family, or planting a memorial tree in memory of Frank Rabe.
Visit the Tribute Store

Share Your Memory of
Frank
Upload Your Memory View All Memories
Be the first to upload a memory!
Share A Memory
Send Flowers
Plant a Tree