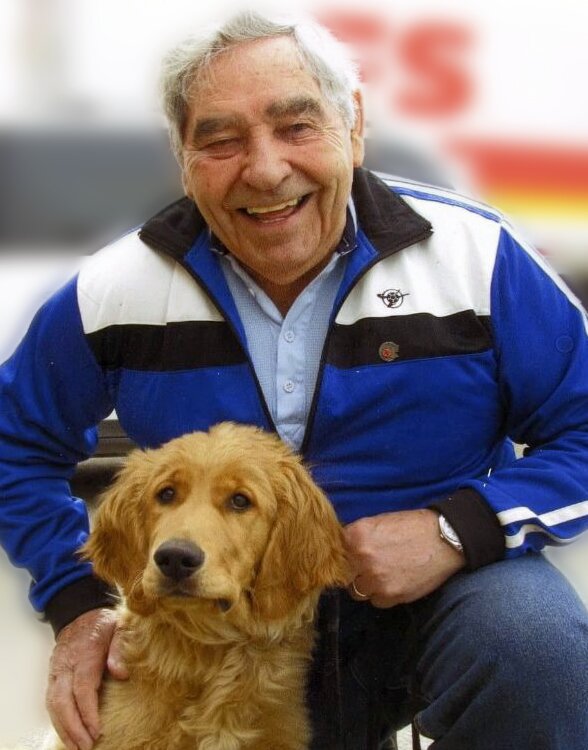 The family invites you to watch the livestream of the Celebration of Life for Scotty McIntosh on Saturday, December 4, 2021 at 2:00 p.m. (CST). Please CLICK HERE.

McINTOSH:  D. J. “Scotty” McIntosh passed away peacefully at his home on Thursday, November 11, 2021, at the age of 93 years.  Scotty was many things to many people, but most important was his role in the family – to his wife Sharon, a loving husband and true soulmate; to his children – Elaine, Valerie (deceased), Shirley, Jean, Danny and Heather - a loving father who became a rock they could count on for support as they grew up and became adults; and to their families, he was a wonderful loving grandpa.    He was extremely proud of his family and enjoyed time spent with each and all of them.

Scotty was kind and fair to all people, and believed everyone should be treated with dignity and respect, no matter who they are or what their background is.

Scotty was born on August 12, 1928, in Aberdeen, Scotland to Daniel James Ferguson McIntosh and Jean Laing (Stephen) McIntosh.  He lived most of his early years in Aberdeen with his parents, sister Jean, and brother Ian (who died in infancy), then moved with his family to the Coventry/Birmingham area of England.  At age 14 he enlisted in the Cameron Highlanders in Inverness, Scotland, as a band boy (music apprentice) where he continued his schooling and received his music training.  At age 17 he became a full member of the military band, and over the next several years he was posted to Austria, Germany, Egypt (Suez Region), North Africa (Libya), and also spent time in London furthering his studies in music.  During this time, his family expanded to include brother Jim (and his mother, Hilda) and later, sisters Wendy, Jenny and Angela (and their mother, Pat).  In 1955, he resigned from the army and began civilian life in Birmingham.

1957 was a year of significant change.  Scotty became a father with the birth of daughter Elaine, and he immigrated to Canada.  The next year and a half were spent in Montreal where daughter Valerie was born.  In 1959, Scotty enlisted in the Canadian Army and was assigned to the Ordinance Corps to learn supply procurement and materials management.  He was posted to Chilliwack, BC, where daughters Shirley and Jean, and son Danny were born.  One of his favourite family memories from this time was taking the family to Hope, BC, where the kids loved seeing the coloured rooftops as they came down the mountain into town.  In 1963, he was posted to Rivers Air Base in Manitoba.  Here in addition to working in base supply, he was trained, and later became an instructor, in the Air Dispatch School, spending much of his time in the air as well as on land.  In 1971 he resigned from the army to take a position in purchasing and supply with the Oo-Za-We-Kwun Centre, Inc.  During his time in Rivers, he became involved in the Rivers & District Pipe Band (an activity shared with his children) as drill instructor, trombonist, and Drum Major.  He also acted as Drum Major with the 26th Field Regiment Pipe Band and the Massed Pipes and Drums of Winnipeg.

1974 was also a year of significant change.  While on a trip to Toronto with the Winnipeg Massed Pipes and Drums, Scotty, now a single father, met Sharon who was a member of the Heather-Belle Ladies Pipe Band in Winnipeg.  After a two and a half year courtship, they were married on December 4, 1976, beginning a long and very happy marriage. Together they helped the kids grow through their teen years into adulthood.  They continued their involvement in the pipe band, and also were involved in the Rivers Community Orchestra.

In 1981, Scotty became the Purchasing & Supply Supervisor for the City of Brandon, and they relocated first to Brandon, and later to a small acreage in the RM of Cornwallis.  He became more involved in music, playing trombone with the Brandon Intergenerational Big Band, the Calculated Risk Dixieland Band, and the BU Monday Night Concert Band (late 1980’s).  But he was most well-known on the local music scene for leading the Scotty McIntosh Big Band, providing big band music at numerous community events and dances.  His passion for his music gave him great happiness, and through it, he met many wonderful and cherished friends.  He also enjoyed traveling, especially visiting the kids and the growing number of grandchildren in Winnipeg, Edmonton and Thunder Bay, and also camping at Banff.

In 1992, daughter Heather was born.  He and “Princess Heather” spent many happy hours together.  Activities expanded to include attending many dance recitals, shows and competitions, and also spending summers at Clear Lake, especially enjoying boating with Sharon, Heather and often Heather’s friends.

In 2013, Scotty, Sharon, Heather and son-in-law Jamie, travelled to Great Britain.  This was a very special trip as he reunited with Jim, Angela and Jenny whom he hadn’t seen since coming to Canada.

After retiring from the City of Brandon in 1997, Scotty entered local politics and served two terms as Reeve of the RM of Cornwallis.  In his words, he was “not a politician but a representative of the people.”  He also served on the boards of the Brandon Economic Development Committee, the Brandon RHA, and the Riverbank Discovery Centre.  He was a founder of Brandon’s Music in the Parks program, and also was a member of the Royal Canadian Legion and Lions Clubs International.

Scotty will be lovingly remembered by his family and many friends.  A private service of remembrance will be held at the Brockie Donovan Chapel in Brandon on Saturday, December 4, 2021 at 2:00 p.m.  You are invited to watch the livestream of this service.  A larger Memorial Celebration of Scotty’s Life will be held when Covid 19 restrictions allow.

Special thanks is extended to Dr. Samaraseena for her caring and compassion.

To send flowers to the family or plant a tree in memory of Scotty McIntosh, please visit Tribute Store
Saturday
4
December

Share Your Memory of
Scotty
Upload Your Memory View All Memories
Be the first to upload a memory!
Share A Memory
Send Flowers