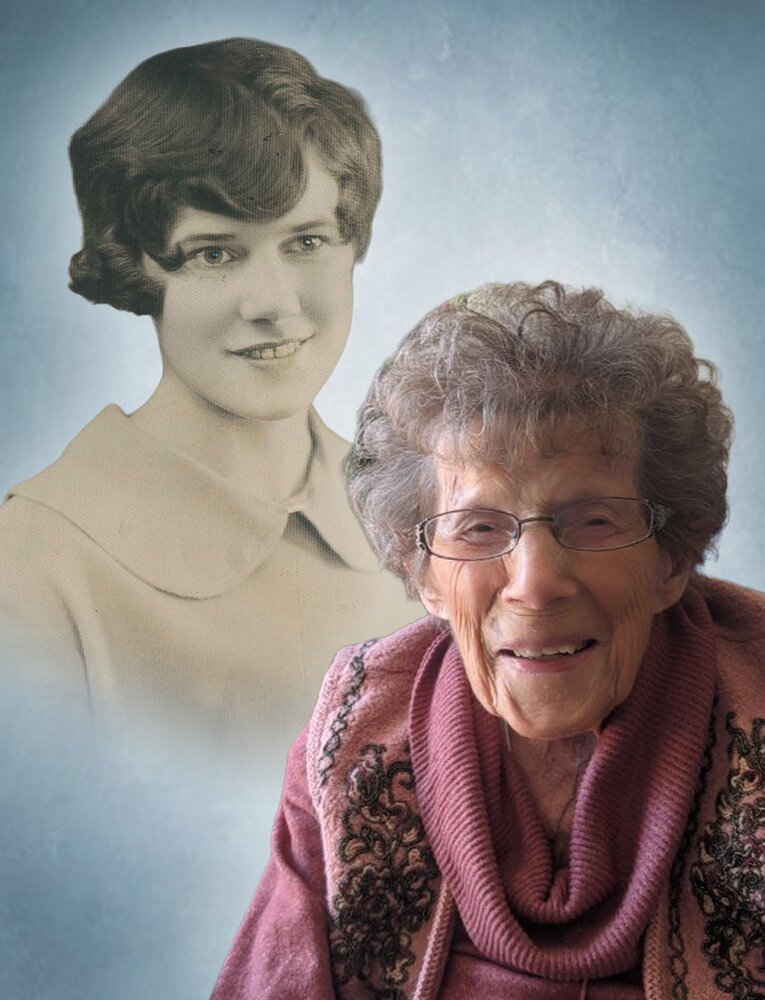 Peacefully and surrounded by her family, Jemima “Mime” Isabel Westcott (nee Casselman) passed away at age 111 on August 24, 2022 at Dinsdale Personal Care Home in Brandon, Manitoba. Mime was predeceased by her husband Reg Westcott in 1965. Sadly, Mime was also predeceased by her daughters Norma Hunter (1998) and Elaine Moore (2007), son-in-law Dean Kersten (2020), and by her 10 siblings.

Mime was born to Steven and “Tillie” Casselman on January 10th, 1911. The middle child of eleven, she grew up on the family farm at Lauder, MB and considered herself a prairie girl her whole life. Douglas was her home for 25 years until a move to Brandon in 1960. In Douglas, Mime willingly contributed to church, school, and sporting life. In retirement from teaching, she loved her garden and curled with the Brandon Ladies League until age 90. She was the ultimate curling fan travelling the world to Air Canada Silver Broom events and to the Canadian Scotties and Briers, including a trip to Penticton at age 107 to watch her grandchildren play in the Canadian Scotties. Mime loved to travel. At age 66, back-packing through Australia and staying at hostels with her granddaughter is a testament to her adventurous spirit, as was visiting family in Alaska to enjoy that frontier part of North America. Enjoying the serene beauty of Lake Metigoshe and being part of farm life in North Dakota fed her prairie spirit. Her long life is remembered by a sense of humour, quick wit, and an attitude of “don’t worry too much and be nice to people,” traits that she showed to the end. She was content with life and comfortable and peaceful when she passed.

Mime was the matriarch of the Westcott family, formerly of Douglas, Manitoba. She was devoted to her family and so proud of their achievements. She is survived by three children, Rae (Joyce) of Tsawwassen, BC, Ron (Flora) of Winnipeg and Joanne Kersten of Kramer, North Dakota, as well as 15 grandchildren and 28 great-grandchildren. The grandchildren include Norma’s Brent (Michelle) Hunter, David (Sue) Hunter of Brandon, and Shawna Brown of Minnedosa; Elaine’s Michelle (Patrick) Reber of Alaska, Leigh Ann Sydenham of Australia and Jennifer (Tim) Green of Idaho; Rae’s Warren and Matthew of Vancouver and Christopher (Luis) of London UK; Ron’s Raunora of Winnipeg, Shea (Tommy) of Edmonton and Brandy (Leslie) of Pinawa; Joanne’s Chris (Mike) Brown of Arizona, Paul (Heather) Sanderson and Rob (Rachel) Sanderson of North Dakota. She is also remembered by extended Casselman and Westcott families, and by students from her teaching years at Derry and Norman schools in the 1930’s, and from Derry, Douglas and Shilo schools beginning in 1952 until retirement in 1976.

For the last 5 years of life Mime received dedicated and loving care from staff at the Dinsdale home.

A celebration of life will be held and announced at a later date.

To send flowers to the family or plant a tree in memory of Mime Westcott, please visit Tribute Store

A Memorial Tree was planted for Mime
We are deeply sorry for your loss ~ the staff at Brockie Donovan Funeral & Cremation Services
Join in honoring their life - plant a memorial tree
Services for Mime Westcott
There are no events scheduled. You can still show your support by sending flowers directly to the family, or planting a memorial tree in memory of Mime Westcott.
Visit the Tribute Store

Share Your Memory of
Mime
Upload Your Memory View All Memories
Be the first to upload a memory!
Share A Memory
Send Flowers
Plant a Tree